Opening of the Museum Henri-Martin in Cahors 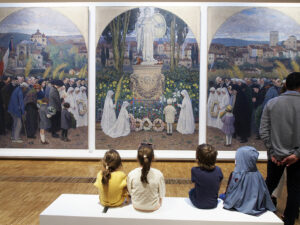 After 4 years of work, the Henri-Martin Museum in Cahors reopened its doors to the public on Friday May 6, 2022, after a stroll through the city.

Meet at 6 p.m. at Square Jouvenel for a first concert, stop on Allées Fénelon with Nora Turpault’s contemporary dance company, go up Boulevard Gambetta to the museum with a second concert in the courtyard. The world is at the rendezvous: 1600 visitors have been counted. After a speech by the mayor of Cahors, Jean-Marc Vayssouze, and the director of the museum, Rachel Amalric, the doors officially open. I had the chance to visit it with the director herself during our interview for Dire Lot, to be published. But there, the works take on another dimension. The scenography, the route, the lights, and the works themselves: everything is done to dazzle us, question us, move us.

Congratulations to the whole team, the challenge has been met hands down!

A place that I will have great pleasure in seeing, seeing again, seeing again… according to temporary exhibitions and other one-off events. Or just for fun.